Sun City Centr, FL - September 11 is a day when many Americans reflect on the brave sacrifices and tragic lives lost in 2001. For employees at South Bay Hospital that reflection included the desire to express appreciation for the Hillsborough County first responders that they work with daily.

"We are very grateful to our EMS and police partners in this area," said Dan Bender, South Bay Hospital CEO. "As we all share in a reflection of what this day symbolizes it is important to us here at the hospital to offer thanks for the sacrifices we know our first responders are making daily right now."

Over 60 local first responders enjoyed a BBQ drive-through lunch provided by the hospital on Friday.

"It is good to connect outside patient care and have the opportunity to talk to them [first responders] and know we are all on the same side," said Robert Kapish, Director of Physician and EMS Relations for HCA West Florida Division. "We are here to help patients and be part of the bigger community."

South Bay Hospital also observed a moment of silence at 9:59 a.m., the time the South Tower collapsed. Employees took time throughout the day to share where they were in 2001.

"They called us in to take over at the airport since all the port authority officers were over in New York City," said McDuffie. "I went on a 12-hour shift and just kept working for at least the next three weeks."

McDuffie also served twenty-six years in the U.S. Air Force and describes his gratitude for the service members who went on to fight in the wars following September 11. He, himself, served in Iraq twice and values the freedoms he has as an American. HCA Healthcare, South Bay Hospital's parent company, was recognized on the 2020 Military Times "Best for Vets: Employer List."

"I think when we support the police like this, as a former highway patrolman, I know for me it was motivating to get out there and do your job," said McDuffie. "It is always nice when somebody has your back and looks forward to seeing you and serving you lunch. So I just think it gives [first responders] the motivation to go out there and do their best, which is what they do every day anyway. These guys give 100 percent."

Michael Zimmerman, Director of Emergency Services, placed flowers on the First Responder Memorial at South Bay Hospital, and reflected on the strong bond across emergency services and in particular in the Sun City Center community.

"South Bay Hospital's strong partnership is invaluable to our overall community's health and well-being," said Zimmermann. "South Bay's commitment to having close collaboration with EMS on both internal initiatives and external initiatives ensures better outcomes when emergencies strike. We have the utmost respect for our first responders and value their selfless service.

Zimmermann shared that during meetings with the local EMS providers they frequently comment how seamless the transfer of patients is from the EMS unit to the emergency room.

"The partnerships we have with our community's first responders save lives," said Zimmermann. 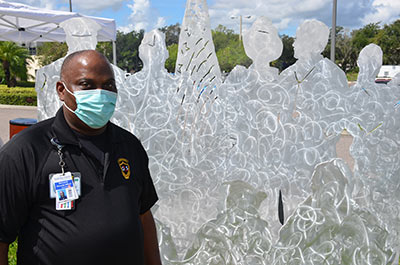 Micahel McDuffie, a member of South Bay Hospital’s security team, was a New Jersey State Highway Patrolman on Sept. 11, 2001. He reflects on being called to cover the airport when Port Authority Officers were responding in New York City. On Sept. 11, 2020, McDuffie is grateful for the freedoms we have in this country. 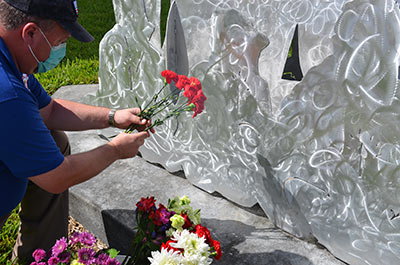 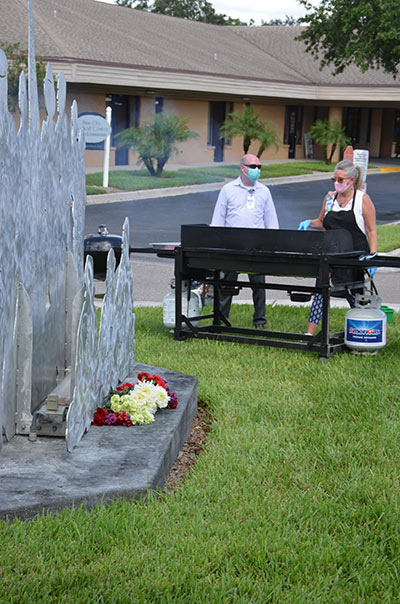 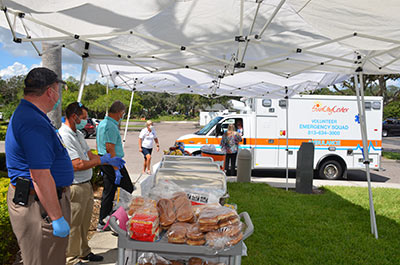 South Bay Hospital hosted an appreciation lunch for area First Responders Sept. 11, 2020. The hospital is committed to a close collaboration with EMS and other emergency personnel ensuring better outcomes when emergencies strike.
Previous
Next